The Logo Remains The Same

Our team of moderately skilled and highly paid lawyers have advised us that to avoid a potential lawsuit we will need to change our brand name. “Free*Style(tm)” is a brand owned by Creamy Cooljoke and has been in existence since 2007.

While researching the brand name “Freestyle(tm)” within Second Life(tm), our crack team of researchers turned up no similar brands. I asked our lawyers if we could then sue Linden Labs(tm) dba “Second Life(tm)” for a faulty search tool, but they advised against that as none of them actually has a license to practice law. We simply hired them because they could quote every episode of Ally McBeal. Bygones.

At any rate, the store formerly known as “Freestyle Shapes & Poses” will now be known as “Fluke”. Please join the new group. The old one will be disbanded later today, and I hate the rude message people get when being ejected from a group. I also fear the potential lawsuits from former members who were hurt by the mean text.

I’ve dropped a new set of poses in the vendor. You can purchase them individually, or get the complete set of 8 for 160L! That is half off the already discounted price per set. It won’t be on sale for long, so hurry!

The “Distressed” pose set, as well as many other

fun things are available at Fluke Shapes & Poses. While you’re there, be sure to grab the free group gift (couples pose) just inside the door.

Allison is the girl next door. A friend to everyone, and is usually available to babysit on weekends with short notice. She doesn’t even mind so much, as she finds the company of a good book to be more satisfying than most of the men she encounters. And she will know when the right man comes along – he will likely be carrying a well used book. 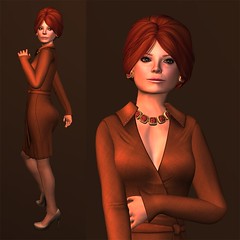 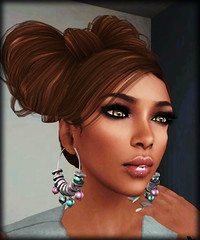 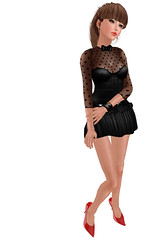